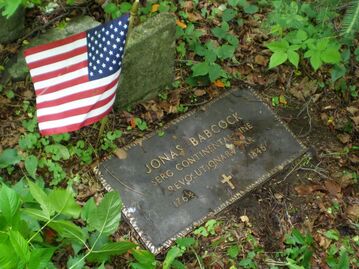 ﻿Jonas Babcock Chapter, NSDAR, was organized ﻿October 9, 1970, by Mary Phelps Engstrom.  The original eighteen members had planned to name their chapter for Carrie Adell Strahorn, but she was considered "too modern" to be honored with a chapter name.  Carrie's Revolutionary War Ancestor, Jonas Babcock, was chosen instead.

Jonas Babcock was born in Stonington, Connecticut, on May 14, 1764.  He first served as a private in the Revolution when he was fifteen years of age.  In all, he served three different terms in the war, and was discharged as a sergeant in 1784. His father and brother also served.  He died in Westford, New York, on December 27, 1847, at the age of 83 years.  A marker was placed on Jonas Babcock's grave by the Iroquois Chapter, NSDAR, on July 23, 1988.

Jonas Babcock was a deacon in the Congregational Church in Westford for 42 years.  He kept a journal which is still in existence.  In this he wrote, "May peace forever remain between the United States and all other powers if possible.  If not, may America subdue them and bring them to peace again." 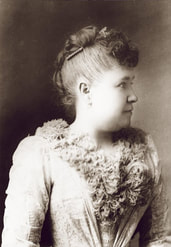 Idaho Historical Society, with Permission
Carrie Adell Green, Jonas Babcock's great granddaughter, was born in Marengo, Illinois, in 1854.  She attended the University of Michigan, and studied music in Europe and Boston.  In 1877, she married Robert E. Strahorn, a reporter for the Rocky Mountain News in Denver, and they made their home in Cheyenne, Wyoming Territory.  Her husband was hired by Jay Gould, the president of the Union Pacific Railroad, to write pamphlets describing the west as a way of attracting settlers.

Carrie and her husband traveled throughout the west from 1877 until 1890.  Carrie was the first white woman to explore extensively the Yellowstone and Glacier National Park areas, and explored the entire west from Alaska to New Mexico.  Following their adventures, they settled in Boston, but missing the west, they moved to Spokane, Washington, in 1898.  It was in Spokane that she wrote her book, 15,000 Miles by Stage, which was published in 1911.

In Spokane, Carrie Strahorn was a member of Esther Reed Chapter, NSDAR, through her ancestor, Jonas Babcock.  Carrie Strahorn was a true Daughter of the West, and an inspiration to the women of eastern Washington and the members of the Jonas Babcock Chapter.
To view Carrie's book, with illustrations by noted western artist Charles M. Russell, click here
﻿﻿﻿
​National Society DAR

Contact Our Chapter
Web hyperlinks to non-DAR sites are not the responsibility of the NSDAR, the state organizations, or individual DAR chapters.
Contact Webmaster
Last updated November 15, 2021